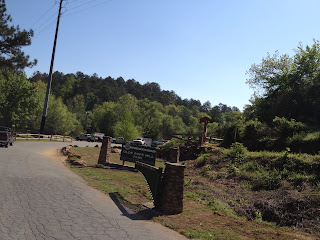 The third race of the Dirty Spokes Trail Race Seriers was held at Olde Rope Mill Park in Woodstock GA.

This trail is maintained by Woodstock Sorba.  The trails are in pretty good condition.  I suspect it is pretty fun mountain biking.

The race started promptly at 8:30am on the nose.  There was a 5K also going on at the same time starting from a different spot which totaled 250 runners this morning.  The 6.5m was the same course as last year which helped a bit.  The race started on the pavement section for about 1/4 mile before turning onto a double track which was pretty muddy along with one creek crossing and over the bridge to lead into some good single track.  I had planned to use my virtual assistant on my garmin to pace however it slipped my mind until I reached mile 1.  Oh well.  The first two miles or so was a bit wet and required a bit of extra careful footing before the first major downhill.  The course was pretty rocky.  More so than I remembered.  I was part of a group of runners that were pacing around 8:40 or so.  I stayed focused on the trail and sear determination that none of the hills would get the best of me.  It became easier to use the hills as a passing opportunity after mile 3.  Miles 3, 4, and 5 were a bit of rolling hills.  During this section I tried to maintain an even pace.  At mile 5.5 the trail looped around need the entry way which was the marker that there was one mile to go.  From that point on I worked on negative splits with the last 1/4 mile being a sprint to the finish on the concrete walkway that we had started.  Crossed the line at 55:something.  The garmin shows it at 55:53 however I stopped it a bit after cross the line.

This was a good race.  Big Peach Running and Montrail Running Shoes sponsored the meal after the race however it was not Paleo friendly so instead stopped by the Burger Inn to get some eggs and bacon.

Great race, thank you Tim and volunteers for a wonderful time

Next up is the ever fast 4th race in the series, Gainesville State College 5.3m trail race.  With a few other things happening I may not make this race.  We will see.   Hate to miss this one.  It is a nice fast flat course.

Posted by threekits at 2:00 PM