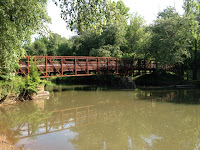 The forth and final race in the Mountain Goat Adventures trail race Series.  This race was at Rope Mill Park in Woodstock GA.  The park trails are well maintain by the city, county, and SORBA.  The short course was a 4mile course with a mix of single track, gravel, and concrete.

The race started out at the end of the concrete pathway heading back toward the parking area.  This was a fast flat run leading to the Avalanche Trail loop 1.  There is a gravel road that leads up to the single track.  Loop 1 is short however there is a second loop named loop2.  Loop 2 had a good decent before beginning the climb.  The trail had been modified due to rain.  Instead of running down to the river and scrambling over boulders we finished Loop 2 popping back out on the gravel road.  Heading back toward the packing lot we then took a hard left across the bridge running to the right going up river.  Mile two was complete just before we got to the river crossing.  The river was about knee deep.  This slowed down the time.  After crossing the river we took a hard left to scramble down the bank of the river before popping back onto the trail.  This short run dropped the runners off into a creak which we ran up. This section was clogged with people trying to get up the creek before finally leading to the last short section of the mountain bike trail.  Just as mile three was finished we came to a sharp drop in the trail.  The runner in front stopped.  Not a good thing.  Once down we were back to the flat concrete path for a fast sprint to the finish line.

This race marked the end of the trail race series.  Unfortunately the results were a bit delayed due to some runners being stung by hornets and a few yellow jacket stings that resulted in the EMT's being called for one case.  Everyone checked out fine.

There was a great turn out for the race.  Race results:  35:42 to place 9th overall and 5th in my age group.  A great finish to the series.  Thanks to the volunteers and Mountain Goat Adventures.

The series points lined up to be a tie going into the fourth race.  I had the lead for 1/2 the race however the river crossing slowed me down resulting in getting passed.    Had a blast meeting and racing the series with Dale and Rob, both in my age group.  Great guys. 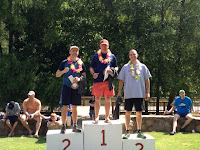 Posted by threekits at 2:00 PM No comments: