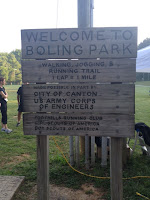 The third race in the Mountain Goat Adventures trail race Series.  This race was at Boling Park in Canton GA.  This is a very nice park with easy access to trails, a crush N run mile track, and access to the Etowah river.

The race started out on the crush N run to give the trail racers a bit of space to spread out.  The first 3/4 of a mile was spent on easy flat surface before heading into the woods for some great single track racing.  A shout out to Troop 241 for some awesome trail and bridge building.  The 4.5 mile stayed on the front section of the trail.  The first mile was a gradual uphill before dropping down along the creek.  There was a bit of tricky footing leading on to the trail which led to a bit of an ankle roll that I will be feeling tomorrow.  First decent was about 400 ft decent.  What goes down must go back up. The next mile and half was a 600 ft ascent to the top.  This ascent was the most difficult as it would not stop.  The hill training earlier in the year payed off allowing me to motor up.  The last section of the trail race was a gradual downhill to the finish line.  Spent a lot of energy on the uphill leaving a slow pace to finish.

Crossed the line back on the crush n run to finish in 39:38.

There was a huge turn out today for the 4.5m and 10m race.    Great job volunteers and Mountain Goat Crew.  It had been awhile since I had been to Boling Park.  Had a great time.  Next up the season finale at Rope Mill.  Last race for all the points. 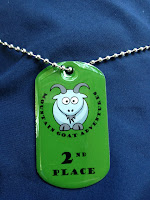 Posted by threekits at 1:00 PM No comments: 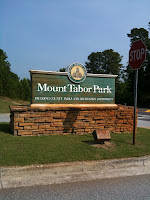 Fifth race in a seven trail race series put on by Dirty Spokes.

The course is a 4 mile loop that is run twice to make up the 8 miles.  The first section of the course has several twists and turns that test ones feet to quickly change directions.  Water stop at mile 4.  The last mile in the 4 mile loop is through a scrub pine section on the top of a hill which gets a bit hot in the sun.
Also one note the run up the hill to complete mile 4 and to cross the finish line makes it a bit of a challenge to sprint.

Having lost 27 pounds, I was able to shave off 15 minutes from last year's time.  All and all a decent race.  I feel I went out a bit too fast however and struggled a bit on the second loop.  Also note no garmin.

As usual results are posted.

Thanks to the volunteers and the Dirty Spokes Crew.  Another great event.