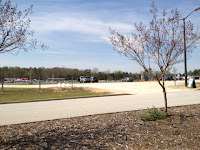 As usual the race started promptly at 8:30am.  The weather was great.  The trail was a new layout which was awesome!  The course utilized the mountain bike trails.  We started in the Steeplechase area coming across the grass leading on to double track.  A little less than a mile in the open double track dumped us into the woods for some very nice single track trail.  I was afraid with the rain we had earlier in the week the trail would be very sloppy however that was the not the case.   The new layout had three major hills to be tackled.  The first coming at mile 1.  Made quick work of that one.  From there is was getting into a groove.  The second would come around the half way mark before the only water station on the course.   This is the one section that I speed hiked up however as soon as I crested the hill I was back at it right past the water station.  The course continued for another mile or so before the last major hill.  I was determined to push through it.  Once at the top I cruised through the rest of the single track.  The single track dumped out on the field giving the runners about a 1/2 mile sprint to the finish line.

I was pleased with my time until I realized I just missed 3rd place in my AG by 12 seconds.  I got out sprinted to the finish.

Thank you to all the volunteers, course designers, and Dirty Spokes.  Love the new course for sure.

See ya on the trails!
Posted by threekits at 1:00 PM