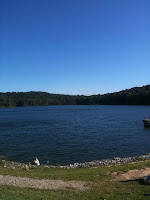 Nice cool windy October day for a trail run around Lake Zwerner in Dahlonega Georgia to raise money for No One alone. The course was a trail run with the first part being on Highway 60.
The day turned out to be a nice day despite the wind.

First off, I under estimated the number of hills in the course.

Started off the race on the road from the park heading across the bridge over the lake before we ducked into the woods and the nice double track trail. The first mile clocked in at 8:28 minutes which was going to be a good pace. I was exited until 2.25 when the first major hill hit. From that point on I realized the course was not flat nor would I be keeping the 8:30 pace. There were two major hills that I had to speed hike up. The rest of the way was a good pace run around the winding trails.

The last quarter mile you popped out of the woods and started to make your way to the foot bridge over the damn to cross the finish line. Finished with a solid 30 minute run around the lake to capture a 3rd place in my age group.

Lesson for this race was never under estimate the course.

This event also had a kayak race as well. That was a lot of fun to watch. Maybe next year I will enter the run & paddle.
Posted by threekits at 2:10 PM